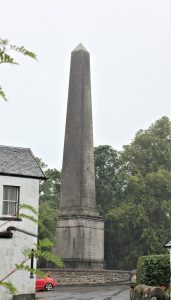 The small, neat town was the birthplace of George Buchanan (1506-1582), a massively important figure in the crucial events of Scottish history in the sixteenth century. He is commemorated by the suitably impressive Buchanan Monument in Balfron Road (G63 9PL). Originally erected in the eighteenth century, the vast obelisk was restored in 1850. It has a Latin inscription, for which an English translation is provided, beginning A man, brave amongst the brave, learned amongst the learned, most wise amongst the wise...

Buchanan studied at the universities of Paris and St Andrews and then taught in Paris and Portugal, where his views attracted the unwelcome attention of the Inquisition.  His position on ecclesiastical matters was at first similar to that of Erasmus, challenging the practices of the church but not its doctrines.  Returning to Scotland, he became tutor to the young Mary Queen of Scots, gradually moving from a Catholic position to open support of the Reformed Church.  He gave powerful support to the changes initiated by Knox and others and became Moderator of the Church of Scotland in 1567.  He was reckoned to be the greatest Latin writer of the 16th century, his works covering poetry, drama, prose and constitutional law.

Another inscription gives a fuller account of Buchanan's significance: George Buchanan, born in Killearn, famed in Europe for scholarship and poetry, his witty satire on a corrupt church led to exile and imprisonment in Europe. He travelled widely, teaching in France, Portugal and Italy. He returned to Scotland in 1561 to the court of Mary Queen of Scots and achieved high office as Keeper of the Privy Seal and Moderator of the Church of Scotland. He taught Mary Queen of Scots and James VI. His advice on the responsibilities of rulers was influential during the 1688 constitutional change and formation of the American constitution. 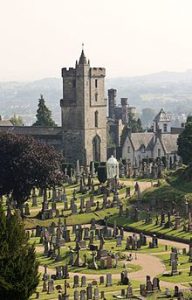 In Scotland's long and turbulent history, Stirling with its impressive castle has often played a pivotal role. The city's location on the neck of land between the Clyde and Forth, meant that whoever commanded Stirling Castle could control movement between the lowlands and the highlands and thus impose their will upon the whole country.

The way up to the Castle is along St John Street, and near the end is the famous and historic Church of the Holy Rude.  Founded in the 1129, the original building was destroyed by fire in 1405. The present church dates from 1414 and can claim to be the only church in Britain apart from Westminster Abbey in London to have been used for a royal coronation.

In 1566, the infant son of Mary Queen of Scots and her ineffectual and unpopular husband Lord Darnley was baptised in the chapel at Stirling Castle, according to the rites of the Catholic church, with many delegations from European royal houses attending the ceremony. However, events moved swiftly. Following the murder of Darnley and Queen's abrupt marriage to Lord Bothwell, she was forced to abdicate and fled to England in 1567. Her 13-month-old son was promptly crowned King James VI of Scotland in a Protestant ceremony here, with John Knox preaching the sermon. In 1603, the king inherited the throne of England as King James I, and is remembered worldwide for promoting the publication of the King James Bible (the Authorised Version). The church is proud of the connection, and when we visited, there was a large display celebrating this triumph of scriptural eloquence, with many tributes from the famous, past and present, praising its beauty and moral influence. 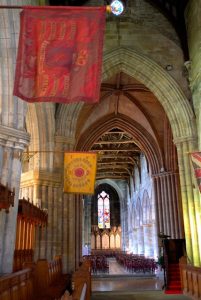 The churchyard of the Holy Rude leads into Mar's Walk and Old Town cemeteries to form the large sprawling Valley Cemetery (FK8 1EG) covering an extensive area on the western side of the castle. This gives a fascinating insight into the styles of Scottish funereal art over many centuries. The well-to-do have their elaborate and ornate tombs and monuments, but it would seem that even those of more modest means often commissioned impressive memorials. There are statues to many famous preachers and churchmen, whether or not their mortal remains actually lie here.

One statue shows Rev. James Guthrie  (1612-1661) in academic gown and holding a Bible, who has the melancholy honour of being the first of the Scottish Covenanter martyrs.  In 1650, Guthrie was appointed minister of the Holy Rude church.  It was a critical time in the affairs of the Scottish church and parliament, in which Guthrie was heavily involved.  Following the execution of Charles I, his son Charles II, seeking Scottish support to recover his throne, had agreed to honour the National Covenant, signed in 1638 - a promise that he later repudiated.  In the course of complex negotiations, Guthrie had personal dealings with both Charles and Oliver Cromwell. There were divisions among the Covenanters about what position to take in these discussions and Guthrie identified with one of the more uncompromising groups known as the "Protesters".  He was also instrumental in the excommunication of the Earl of Middleton, who became Charles II's commander-in-chief and Lord High Commissioner for Scotland.  On the Restoration of Charles in 1660, with Middleton as a powerful enemy, Guthrie's fate was sealed.  He was tried in Edinburgh and and hanged for treason at the Mercat Cross, his head displayed on Netherbow Port. 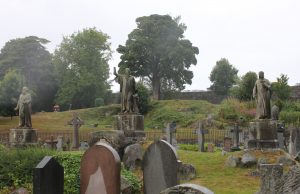 Statues of Knox, Henderson and Melville

Guthrie was the first Covenanter to suffer martyrdom and James Renwick (1662-1688) - unborn at the time of Guthrie's death - was the last. He also has a statue here. The twenty-eight years, covering the reigns of Charles and his brother James II became known as the Killing Times, which only ended when the Glorious Revolution of 1688 brought merciful relief.  Memorials to those who suffered are found in many parts of Scotland (see www.covenanter.org.uk).

Together on a low mound  are statues of John Knox (1514-1572), Andrew Melville (1545-1622), and Alexander Henderson (1583-1646), each man covering in succession a critical period in the history of the Scottish Church.  Henderson wears a sixteenth century ruff and holds a scroll in one hand, presumably the National Covenant.  Knox is shown full bearded with one arm raised in preaching, but both hands have been lost through weathering.  Melville is carrying a book and also holds a shepherd's crook. 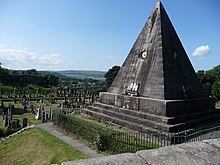 Overlooking the whole burial ground is the mysterious Star Pyramid, commissioned in 1863 by William Drummond, owner of a successful horticultural business.  It is dedicated to all those who suffered martyrdom in the cause of civil and religious liberty in Scotland, referring principally to the Covenanter period.  Each face of the pyramid has an open Bible in white marble with a text from the Psalms, a carved circular rosette, a thistle and a crown, suggesting strong support for the Union of England and Scotland.  Beyond that, visitors may speculate on whether Drummond had any other motives in conceiving this unusual monument. 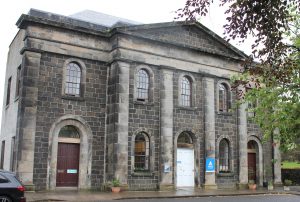 Set back in a little cul-de-sac off St John Street is a building formerly known as the Erskine Church, now used by the Scottish Youth Hostel Association. Ebenezer Erskine (1680-1754) is recognized as one of the founders of the Secession Church, which in 1733 separated from the Church of Scotland over the question of the appointment of ministers, a move which anticipated the Great Disruption of the following century. The secessionists believed that no church should have a minister imposed on them, without the consent of the congregation. Erskine preached to a large and influential congregation in Stirling for the rest of his life. The first Secession church was built for him here in 1740, but this was replaced by a later building in 1824, of which only the facade remains. On a grass island in front of the former church is an elaborate monument to Erskine, erected over his tomb in 1859. This shows that his influence continued for many decades after his death, although it seems he is little remembered today.  He also has a statue in the cemetery.