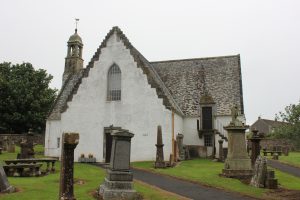 The parish of Fenwick was a centre of the Covenanter movement, a determined effort by the Scottish church to resist the attempts of Charles I and Archbishop Laud to impose episcopacy and the English liturgy on Scotland.

The Parish Church (KA3 6DJ), with its bell tower and unusual stepped gables, was built for William Guthrie (1620-1665) in 1643. Under his leadership, the area became a focus of Covenanter activity. In the churchyard are several graves and memorials to Fenwick Covenanters, marked with a characteristic green metal plaque. Some of them refer to an incident in 1685, when several, including one Peter Gemmell were killed by “Nisbet and his party”. (For details of Covenanter memorials throughout Scotland and beyond see www.covenanter.org.uk)

Guthrie was born in Brechin in Angus to a distinguished local family.  While at Fenwick, he travelled widely to preach and sometimes found himself at the scene of military action involving the Covenanters.  He was at Dunbar when the Scottish army was defeated by Cromwell's forces. For some time he enjoyed the protection of sympathetic aristocrats, but eventually was removed from his ministry and returned to Brechin in poor health, where he died at the age of only forty-five. 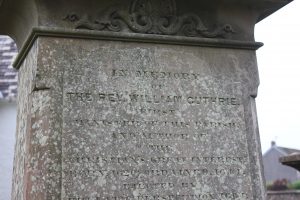 Not all those commemorated are necessarily buried here. One memorial is to Captain John Paton, who suffered martyrdom for his beliefs in the Grassmarket at Edinburgh in 1684. Another  remembers several Covenanters, sentenced to be transported to America, who perished when their ship foundered off the Orkneys in 1679.

Guthrie is buried at Brechin but has a prominent memorial stone here. The epitaph records that he was the author of The Christian's Great Interest.