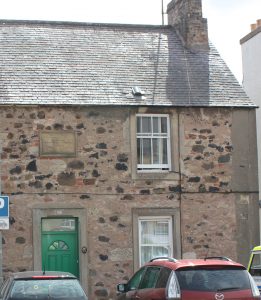 Thomas Boston (1676-1732) was born at what is now 13 Newtown Street, the son of Covenanter parents.  Educated in Edinburgh he became first a schoolmaster and then, from1707, a minister serving at Ettrick in remote border country a few miles from Moffat. He was a prolific writer, his works including The Fourfold State, Body of Divinity and his autobiographical Memoirs.

His birthplace is a modest stone-built end-of-terrace house, opposite the police station (TD11 3AS). The commemorative plaque is suffering from erosion and difficult to read. 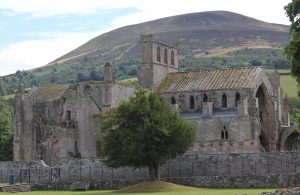 The saintly Cuthbert (c634-687) was a monk at Melrose Abbey before being transferred to Lindisfarne to lead the Northumbrian monastery in succession to Aidan. It was Aidan who had founded the original monastery here in 635. The present abbey ruins (TD6 9LA), which are open to the public, are from a later Cistercian abbey, founded in the 12th century. The original Anglo-Saxon foundation was a bit further to the north, probably on a bend on the River Tweed.

Cuthbert inspired such devotion in the early Northumbrian church, that when - 200 years after his death - Lindisfarne was under attack from the Vikings, the fleeing monks carried his body with them.  After much wandering, including a century at Chester le Street, it eventually came to rest at Durham, where the saint is buried and his casket, with the treasures it contained, are on display at the Cathedral.

The Abbey is set in beautiful countryside and provides the starting point for St Cuthbert's Way, a long distance footpath ending at Lindisfarne, enabling pilgrims and walkers to reflect on the work of Cuthbert and the early story of the Northumbrian church. This route also links up with other walking routes, including the Pennine Way, the Southern Upland Way and the Northumberland Coastal Path.

Horatius Bonar (1808-1889) ministered at North Church, 42 Bowmont Street (TD5 7JH) from 1837 to 1866, when he transferred to Chalmers Memorial Church in Edinburgh.  He is remembered as a writer of devotional hymns, among which Fill thou my life O Lord my God in every part with praise and I heard the voice of Jesus say are often included in modern collections.