Dundee is a busy port city, whose industries were once summed up as jam, jute and journalism, the last relating to the publishers of the children's comic Beano.  It also has a long tradition of shipbuilding and hosts the retired Royal Yacht Britannia as a tourist attraction. 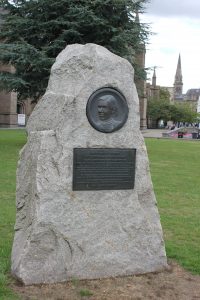 For the purposes of this guide, there are associations with the protestant reformer and martyr George Wishart (1513-1546),  the preacher and revival leader Robert Murray M'Cheyne (1813-1843) and the missionary Mary Slessor (1848-1915).

The main art gallery and museum of Dundee is the McManus in Albert Square (DD1 1DA).  Upstairs is a cabinet devoted to the work of Mary Slessor.  It has some of her personal possessions and photographs, as well as her Bible and diary.  There are also some African artefacts, collected during her 40 years in the Calabar region of Nigeria.

Outside the misnamed Steeple Church in Nethergate (it doesn't actually have a steeple!) is a memorial to Mary Slessor, consisting of a large piece of granite, inset with a relief portrait (DD1 4DG).  It was erected in 2015 to mark the centenary of her death.  The inscription describes her roles as weaver, teacher, missionary, magistrate.  Born in Aberdeen, she began work, as little more than a child, in one of the city's textile mills.  Travelling to Calabar at the age of 28, she laboured for 40 years in that part of Africa sometimes referred to as the white man's grave.  She is remembered for challenging the superstitions of local tribes, particularly in relation to the birth of twins, which were assumed to be the work of evil spirits. 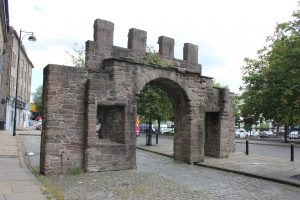 Looking a bit forlorn among the offices, flats and hotels of modern Dundee, is a remnant of the old city wall known as Wishart's Arch (DD1 2JA). The name refers to George Wishart, the Scottish reformer who was burned at the stake in St Andrews in 1546, under the auspices of Cardinal David Beaton.  This triggered a violent response when supporters of the Reformation broke into St Andrews Castle and slew Beaton.  Wishart's reputation for courage and dedication had already been established in Dundee, when he remained preaching and ministering to the poor during an outbreak of the plague while most others had fled.  The inscription on the arch records that during the plague of 1544, George Wishart preached from the parapet of this port to the people standing within the gate and the plague-stricken lying without in booths. 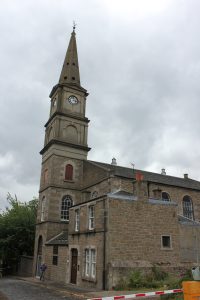 Alongside the arch is a terrace of buildings used either for retail or as part of the large Hotel Indigo behind.  At the east end of the terrace a name above the doorway identifies one building as the former Wishart Church.  It was to this church that the young Mary Slessor belonged while growing up in the city.

Just off the Perth Road as you leave the city to the west, is St Peter's Church, scene of the ministry of the saintly Robert Murray M'Cheyne.  Born and Educated in Edinburgh, M'Cheyne served here from 1836 until his death from typhus at the tragically early age of 29.  A notice tells us that he was the first minister of this congregation.  The church is largely unchanged from M'Cheyne's time and he is buried in the churchyard, but unfortunately access outside normal service times is not generally available.  During his lifetime there was a growing interest in preaching the gospel to the Jews, and M'Cheyne went on an expedition to Palestine with his friend Andrew Bonar to investigate the possibility of starting a Jewish mission 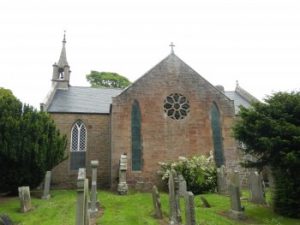 This small community saw the opening years of the ministry of Thomas Guthrie (1803-1873), later to become famous as one of the leaders of the Great Disruption and the formation of the Free Church of Scotland.

Born in Brechin, Guthrie studied medicine at Edinburgh, before transferring to theology.  Known as a strong evangelical, he found it hard at first to find a parish.  In 1830, he was offered the living of Arbirlot by a local patron - ironically in retrospect as the Disruption was principally about congregations being able to choose their own ministers.  He served for seven years before moving to Edinburgh as minister of Old Greyfriars Church.  His medical skills were put to good use when there was an outbreak of cholera in the parish during his ministry.