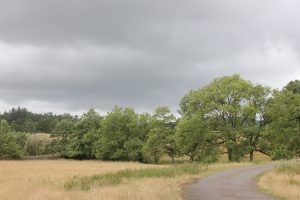 John Paton (1824-1907) was born in a cottage at Braehead Farm (DG1 1TF), where his father was a home stocking-frame worker.  It lies up a narrow lane between Kirkton and Dalswinton, just opposite the main entrance to the Dalswinton estate. After about a quarter of a mile the lane becomes a farm track. There appears to be nothing to indicate the link with Paton, but the landscape has probably changed little since that time.

When Paton was about five, the family moved to the neighbouring village of Torthorwald.  From an early age Paton joined his father on the stocking frames, but after schooling he left to train for the ministry in Glasgow.  He movingly described how his elderly father walked with him for the first six miles on the road to Kilmarnock, praying and talking of the things of God.

After serving the poor of Glasgow for some years, Paton's call to missionary work led him to the island of Tanna in the New Hebrides (now Vanuatu) in 1859. Three months after his arrival, his young wife gave birth to a son but died 19 days later, followed by the little boy at 36 days.  The experiences of missionaries in the Victorian era may now be a subject for cartoon and caricature, but the natives of Tanna were indeed cannibals and Paton was obliged to sleep on his wife's grave to prevent such desecration.  For several years, living alone, he endured many threats and dangers from both tropical fevers and hostile inhabitants, and in 1862 narrowly escaped from the island by ship from a crowd of murderous tribesmen.

Returning after furlough in Scotland and Australia, Paton and his second wife moved to the neighbouring island of Aniwa, where, following the conversion of two chiefs, there was a remarkable transformation in culture and beliefs, as the Christian gospel spread throughout the population. Schools, a printing press and a medical dispensary were established and Paton produced a New Testament in the Aniwan language. 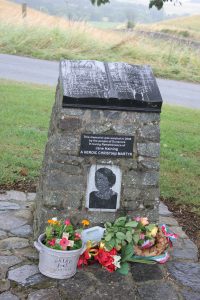 This was the birthplace of Jane Haining (1897-1944). In 1932 she was appointed matron of the girls' home at the Scottish Mission School in Budapest, whose pupils were mainly Jewish. With the outbreak of war in 1939, she declined requests from the Church of Scotland to return home and remained with her pupils. She was arrested and taken to Auschwitz with them, where she died of disease on about 17th July 1944. She is commemorated in the Garden of the Righteous at Yad Vashem in Jerusalem.

There is a memorial to Haining on the grassy area just outside the churchyard. It describes her birth at Lochenhead Farm in the parish, her education at Dumfries Academy and her subsequent career which included ten years as secretary at a textile company in Paisley. There is also a memorial inside the church. 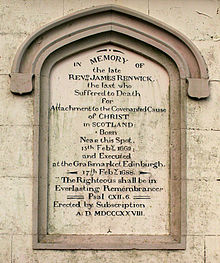 James Renwick (1662-1688), the last of the Covenanters to suffer death by execution, was born here. Overlooking the valley, just off the Ayr Road is an impressive monument with a panel declaring that he suffered death for attachment to the covenanted cause of Christ in Scotland.

Renwick was educated at the University of Edinburgh, where he had witnessed the execution of other Covenanters, including Donald Cargill, and spent time at various universities in Holland, where he was ordained in 1681. He returned to Scotland and served as a travelling preacher for five years from 1683. When eventually captured, he was sentenced for refusing to swear loyalty to King James II, and was hanged in the Grassmarket in Edinburgh in February 1688. However, by the end of that year the king had been deposed and the vicious persecution of the Covenanters was at an end.

This small hamlet close to Gatehouse of Fleet was the scene of the labours of Samuel Rutherford (1600-1661). Arriving in 1627, he was both an energetic preacher and a faithful pastor, but in 1636 the efforts of Charles I and his bishops to impose episcopacy on the Scottish church saw him exiled to Aberdeen, where many of his famous Letters were written. He returned briefly to Anwoth in 1638, but soon after took up the post of Professor of Divinity at the University of St Andrews.

In 1643, with the English Civil War in progress, he travelled to London as one of the Scottish Commissioners to the Westminster Assembly, where he remained for four years. During this period he published Lex Rex (The Law and the Prince), which sought to define the Biblical perspective on the limits of royal authority, a much-disputed subject at the time.  Returning to St Andrews in 1647, he became Principal of St Mary's College and Rector of the University in 1651.

Anwoth Old Kirk is now a ruin but carries a plaque to Rutherford's time here.  On the hill nearby is the granite memorial obelisk (DG7 2EW), visible from the main A75, erected in 1842. It stands 56 feet high and the inscription celebrates Rutherford's eminent talents, extensive learning, ardent piety and ministerial faithfulness. Today, the faithful pastor is remembered mainly for his collected Letters, which are still in print. 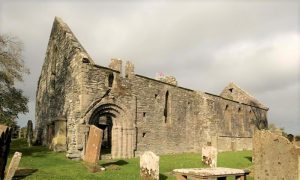 While much of the historical detail may be vague, Whithorn, with its coastal neighbour Isle of Whithorn, is the traditional site for the arrival of St Ninian, who brought Christianity to Scotland in 397. What is less vague is that a centre of faith developed on the island of Iona from which early saints like Aidan travelled to Northumbria, establishing the monastery Lindisfarne (see page for Argyll & Bute). Here, not only was the north of England evangelised but great cultural treasures like the Lindisfarne Gospels were created.  Whithorn Priory and Museum, 6 Bruce Street (DG8 8PY) celebrates the story. It displays intricately carved stones and crosses, among which is the Latinus Stone, dating from the 5th century. This is the earliest Christian monument in Scotland, and the inscription records the visit of a man called Barravados and his 4-year-old daughter.

We can also visit the ruined Chapel of St Ninian, which is on the promontory adjacent to the harbour at the Isle of Whithorn, some three miles to the south. Both the priory and chapel date from many centuries later than the saint himself. They were on the route taken by medieval pilgrims and were suppressed at the time of the Scottish Reformation.

St Ninian's  Cave (DG8 9JU) on the coast, where the Celtic saint may (or may not) have found shelter, requires a walk of about 2 miles from the A747.