Just off the A1, this is a handsome town on the banks of the River Tyne (not to be confused with the English Tyne). It is remembered as the birthplace of John Knox (1514-1572) and also for the ministry of the eighteenth century preacher and writer John Brown (1722-1787), often referred to simply as John Brown of Haddington, to distinguish him from others of the same name. 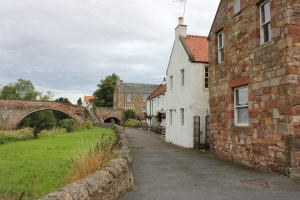 The town seems to have little to celebrate its role as the place where the great Scottish reformer came into the world. Knox's birthplace is believed to have been in the Nunngate or Giffordgate area, across the river from the town centre. We could find nothing to mark the spot, but some local buildings and a bridge over the river look old enough to have been around in Knox's time. The only visible memorial appears to be his statue, in preaching mode, in a recess halfway up the clock tower of the former Knox Academy School. This is located a short way along the A6093 towards Dalkeith. The academy is in the process of conversion to residential use and is now called Knox Court. 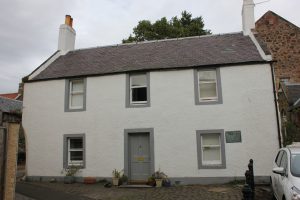 John Brown ministered at the impressive St Mary's Church (EH41 4BZ) and lived at No 12 in what is now John Brown Court, a little close off Market Street near the town centre. A plaque tells us that he lived here for 30 years and here wrote his Self-interpreting Bible. He is buried at St Mary's, but the churchyard is so extensive that the site would be hard to find without directions. 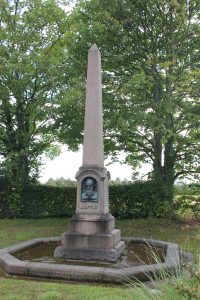 At one end of this well-kept village are display panels telling its history and the story of famous people born locally.  Among the best known is Robert Moffat (1795-1883), who started life as a gardener and ended it as a much respected missionary to South Africa and what is now Botswana, and father-in-law to the even more famous David Livingstone, whom he outlived by 10 years.

Moffat has a memorial obelisk at the other end of the village, with a full-bearded bust set into a recess on one side (EH35 5HT). His achievements are recorded on the inscriptions. Moffat translated the Bible into Sechuana and laid the foundations of the Christian church in Bechuanaland and Southern Rhodesia [Botswana and Zimbabwe]. He was a pioneer of the London Missionary Society from 1817 to 1870, covering almost the entire lifespan of Livingstone. He toured amid the horrors of tribal warfare, and through his Christian character won the friendship of the dreaded Matabele chief Mzilikazi