Located on the breezy coast of Fife, St Andrews is best known for its ancient University, whose buildings occupy much of the city, and also as the spiritual home of golf, with many courses in the surrounding area. 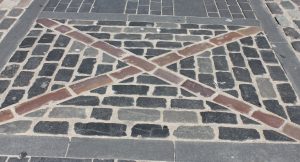 Less well known, but of great importance, is its role in the Scottish Reformation.  A number of leading reformers were martyred here, but rather than snuffing out reform, this only served to accelerate it, with a vigorous and sometimes violent reaction.  Indeed, a foretaste of the future occurred a century earlier, when Pavel Kravar (also known as Paul Craw) visited the town as an emissary from the Hussites of Bohemia.  Kravar was a scholar and physician to the King of Poland, but rather than being treated as an honoured guest, he was tried for heresy.  He defended himself with skill, but was found guilty and burned at the stake on 23rd July 1433.  A cross of cobbles set into the centre of Market Street marks the site of the former Mercat Cross, the site of his martyrdom. The plaque on a neighbouring building describes the events. 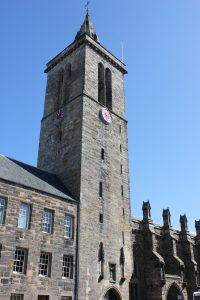 The focus of the university is St Salvator's chapel, with its tower and red-faced clock, overlooking North Street, the broad and handsome main thoroughfare of the city.  Within the chapel itself is a pulpit that may have been used by John Knox, but not in this location; it has been acquired from another church. Of more significance for the Reformation, however, are the initials PH, set into the paving just outside the chapel. This marks the site where Patrick Hamilton, a young man of noble birth and one of the heralds of reform, was burned at the stake on 29th February 1528. 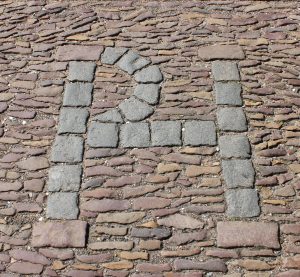 Born in 1504, Hamilton was descended on his mother's side from King James II of Scotland. In 1517, despite his youth, he was appointed the nominal Abbot of Fearn Abbey in Ross-shire. This provided an income, enabling him to study at the University of Paris, where he gained a Master of Arts in 1520.  While in France he studied and accepted the teachings of Martin Luther.  Returning to Scotland, he enrolled at the University of St Andrews as a student and colleague of the humanist John Mair. While there, he composed and conducted a mass at the Cathedral.

He was also starting to teach the doctrines of the Reformation, which brought him to the unwelcome attention of Archbishop James Beaton.  This caused him to flee to Europe, this time to Germany, where he met other reformers and probably the Bible translator William Tyndale.  Returning to St Andrews, he was allowed to preach for about a month before being put on trial for heresy under Beaton. This attempt by the church authorities to snuff out the first sparks of the Reformation was a complete failure.  As one contemporary commented, The reek of Master Patrick Hamilton infected all it blew upon. 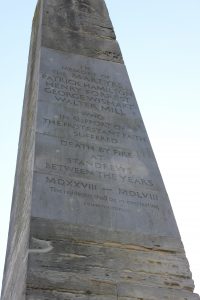 The four main streets of St Andrews run parallel, and the northernmost, overlooking the sea, is called The Scores.  At one end, close to the Royal and Ancient Golf Club, is the Martyrs Monument, while at the other is the ruined Castle. The Monument stands in a splendid position on the seafront amid beautifully kept lawns and flowerbeds.  It is a massive stone obelisk, but has suffered from weathering over the years and is in need of restoration.  On one face are the names of Patrick Hamilton, Henry Forrest, George Wishart and Walter Mill who in support of the Protestant faith suffered death by fire at St Andrews between the years MDXXVIII and MDLVIII.  Forrest and Mill are less well known than the others. Forrest was a Benedictine friar, who was condemned for nothing more than being in possession of an English translation of the New Testament.  He probably died in 1532 or 1533.  Walter Mill (or Milne) was the final Scottish martyr of the Reformation, who was burned at the stake in April 1558 at the age of 82.  He was a former priest, who had given up celebrating mass which he regarded as idolatrous. On being suspected of heresy, in 1536 he fled to Germany, where he married. This was further held against him when he returned to Scotland twenty years later. 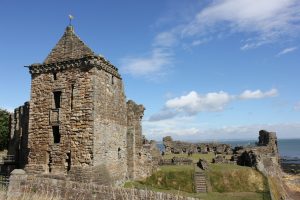 At the east end of The Scores is the Castle and here, another tragic chapter in the story of the Scottish Reformation was played out.  George Wishart, born about 1513, was, like Patrick Hamilton, a scholar who had travelled extensively in Switzerland, Germany and Flanders.  He had imbibed reformed teachings, especially the ideas of Calvin and Zwingli. He returned to Scotland as a teacher and itinerant preacher of Protestant doctrines. He is remembered especially in Dundee, where he continued to preach and serve at the east port of that city during an outbreak of the plague, when most of the other authorities had fled. The site, now known at Wishart's Arch, can still be seen.  Betrayed to Cardinal David Beaton (the nephew of Archbishop James Beaton, who had condemned Patrick Hamilton eighteen years before), he was condemned for heresy after a mock trial and burned at the stake outside the castle on 1st March 1546. The initials GW set into the roadway mark the spot. 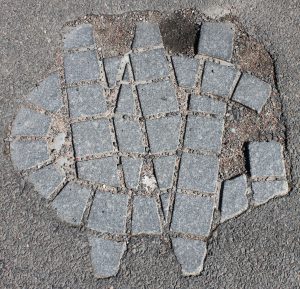 For the growing number of Protestants, this was the last straw. On May 26th, Wishart's friends and supporters, led by Norman Leslie, the Master of Rothes, stormed the Castle, slew the Cardinal and hung his body from the battlements.  Within the building, they created the first congregation of the Protestant church in Scotland.

The ruined Cathedral and its surrounding graveyard occupies a large area of the eastern part of the city.  As the information boards tells us, John Knox in 1559 preached such a fiery sermon in the nearby Holy Trinity church, that the congregation were moved to rush out and tear down most of the ornaments and hangings in the cathedral. 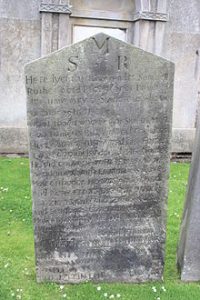 By 1600, the cathedral was in its present ruined state. However the surrounding graveyard was still in use and the godly Puritan preacher and writer Samuel Rutherford was laid to rest here in 1661, where his tombstone can still be see just west of the Bell Tower. Much weathered, his epitaph is still legible in places and includes the words Acquainted with Emmanuel's Love.  Rutherford, remembered mainly for his pastoral work at Anwoth in Galloway, came to St Andrews as Professor of Divinity in 1639 and spent the rest of his life here in senior academic roles, apart from four years as a member of the Scottish Commission to the Westminster Assembly in London.  On the restoration of Charles II in 1660, Rutherford was under threat of being tried for treason as a strong supporter of the Covenanter party, but his death from illness in 1661 saved him from the fate of his friend Dr James Guthrie.

At the eastern end of the town, one of the university halls is named after Andrew Melville (1545-1622), another significant figure in the Scottish Reformation, bridging the period between John Knox and Alexander Henderson.  Highly educated, partly on the Continent where he had met Protestant Reformers in Geneva, Melville's knowledge of Latin, Greek, Hebrew and Syriac astonished his teachers.  He held academic roles at the Universities of Glasgow and Aberdeen, before becoming Principal of St Mary's College in St Andrews in 1580, and also served as Moderator of the Church of Scotland.  A vigorous defender of Presbyterian church government, his opposition to bishops brought him into conflict with the youthful King James VI, who in 1601 became James I of England.  Invited to London in 1606, he berated bishops in the presence of the king, and found himself imprisoned in the Tower of London for four years.  He was released in 1611 to take up a post at the University of Sedan in France where he spent the rest of his life 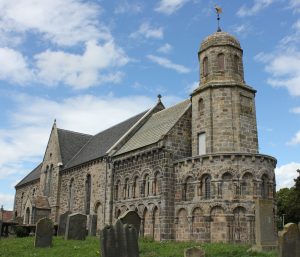 The unusually named Church of St Athernase is remembered for the ministry of Alexander Henderson (1583-1646), a most significant figure in the early history of the Reformed Church in Scotland. He was largely responsible for the text of the National Covenant, signed in Greyfriars Church in Edinburgh in 1638. He negotiated personally with Charles I, who was much impressed by his learning and piety. Despite this, attempts by the king to impose episcopacy and conformity to the English Prayer book on the Scottish church was part of a chain of events leading to the English Civil War. The church is a rather strange hybrid – distinctly Norman at one end and Victorian at the other. Rectangular and quite plain inside, it has a gallery but no aisles or transepts. 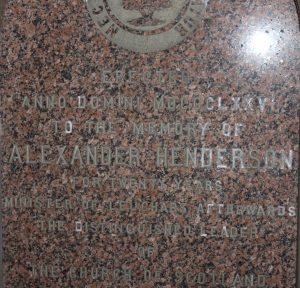 Henderson was appointed minister by the archbishop in 1612, and at first the congregation were unhappy about the appointment. However, he soon found general acceptance and described St Athernase as the “living” church, perhaps by comparison with other congregations.  He continued as minister until 1639, when he transferred to the high kirk of St Giles in Edinburgh. As well as his role on the national stage, Henderson was a conscientious minister in his own parish, providing a village school and house for the master.  He also endowed a library at St Andrews University. There is a memorial in the porch on the south side of the church. 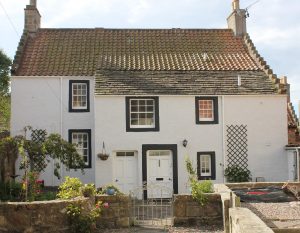 This small town on the coast of Fife was the birthplace of Thomas Chalmers (1780-1847), an important player in the events of the Scottish church in the first half of the nineteenth century. His original home is a handsome white-painted house in a little gated close called called Old Post Office Close, (KY10 3DQ) just off the narrow High Street by the Bank Bar and Kitchen. It has Dr Chalmers Birthplace and his dates, set in wrought iron on the front gate.