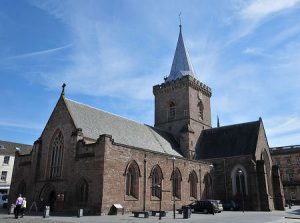 Many locations in Scotland have been suggested as the place where a powerful sermon by John Knox provided the spark that ignited the fires of the Reformation.  St John's Kirk of Perth has as good a claim as any.  Located in St John's Place (PH1 5SZ), this distinctive title helps to avoid confusion with other St John's churches in the town.

The event in question took place on the 11th of May 1559.  The great reformer weighed in against the idolatry of Catholic imagery, which led to a riot in which a number of monasteries in the town were destroyed and St John's itself stripped of all trappings of Catholicism. Following the Reformation, the church fell into disrepair and at one time was divided internally so that two or three congregations could meet within the same building.  In the nineteenth century, it was restored by the architect Sir Robert Lorimer with the internal divisions removed. 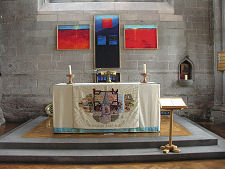 Ignoring the memory of Knox's invocations against decoration, the church now has much modern artwork - stained glass windows, pictures and a statue of John the Baptist, as well as coats of arms and memorials to Scottish regiments.  The John Knox Chapel, with a communion table and modern artwork by Hugh Murdoch, remembers the reformer's place in the church's story. 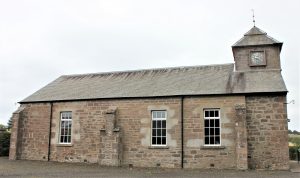 Andrew Bonar (1810-1892), preacher, writer, revivalist and brother of Horatius, ministered at Kirkton of Collace, a rural parish between Perth and Dundee from 1838 to 1843. At the Great Disruption of 1843, when the Free Church of Scotland separated from the main body, Bonar moved to the nearby village of Kinrossie, where a new church was built for him.

In 1929, the congregations were reunited, so Bonar's church became the Kinrossie Village Hall. This modest building, made from grey stone with solid buttresses and a little clock tower, has one reminder of Bonar's time here. This is a panel with a text from the book of Revelation The Lamb shall overcome them, for he is Lord of Lords and King of Kings.